The Oxford Dictionary of Proverbs lists the oldest written version of the saying “what you don’t know can’t hurt you” as coming from playwright George Pettie’s Petit Palace in 1576:

Several Rothschild-controlled centuries later, what Americans don’t know about “the Fed” may be fatal.

The Fed gained control of America’s money in 1913. Government debt now soars toward $17 trillion. Interest paid to service this debt, for the year 2011 alone, was $454,393,280,417.03, largely funneled by the Fed to eight international banking families:

Ever heard a better argument for entitlement reform?

Keeping the America public ignorant of why debt crises and threatened government shutdowns are a semi-automatic ruse aimed at social programs; reinforcing that cherished ignorance is a vital function of mainstream corporate media (MSM). Prevailing “see no evil, hear no evil, speak no evil” public attitudes toward the Fed are boosted by the trouble decent people have even imagining such an epic crime…there must be a law! Then, there’s faith…I really want to believe the Fed is part of the federal government. There are some ways to get out of debt, like Debt consolidation can help. You can pay your all debt using debt consolidation loan.

No matter how many times former Fed Chairman Alan Greenspan and others remind us that the Fed is an untouchable independent agency, people like to believe what they want to believe, regardless.

An image problem with our country’s first two Rothschild-controlled central banks was transparency of the name, “U.S. Central bank”, or “BUS” (Bank of the United States).

Our current “Federal Reserve System”…now there’s a name with enough mojo to span a century, and even juice Congress into re-chartering the Fed for another 100 years (to 2113). MSM went totally mild.

In terms of persona, the Fed is Bela Lugosi. Spooky, deadly-secretive, omniscient, riveting…the Fed sounds like part of the federal government, sounds backed with reserves…a “system” instead of a bank—all a fiendishly-charming triple play. When the Fed walks into the room, heads turn. When the Fed controls a superpower’s money, heads roll.

A dominant way to bank dollars from thin air is the Federal Reserve System’s entitlement.

For instance, to circulate another billion dollars of fiat currency, our government does not print debt-free U.S. Treasury Notes, as mandated in the Constitution. Instead, a billion dollars of debt (Treasury bonds) are given to the Fed, who then creates from nothing a billion dollars in Federal Reserve Notes and loans them to the government at compound interest. Whether it’s currency, or digits on a computer screen, by creating money this way, the amount of debt created is always more than the dollars created, leaving no way for the debt to ever be paid off.

Entitlements are one thing; the Fed’s exclusive dollar monopoly seems otherworldly. Could there be a greater entitlement than ownership of the dollar with accountability to no one?

By auctioning its (free) Treasury bonds through “Open Market Operations”, the Fed helps spread U.S. debt around the world.

1913 was a brutal year for U.S. public interest. The Federal Reserve Act, and the 16th Amendment (federal income tax) both began transferring wealth from the public to the elite in 1913. So much money is needed to finance government debt created by private central banking, a personal income tax is demanded.

When you write a check to the IRS…notice the endorsement on the payment coupon: “Pay any F.R.B. Branch or Gen. Depository for credit U.S. Treas. This is in payment of US. oblig.”

In other words, Pay the Fed.

Fractional Reserve Banking is another magical mystery machine for creating money from nothing, or as George Bush I blabbed:

“…the continuous consolidation of wealth and power into higher, tighter and righter hands.”

Bush I was talking about the reason for Iran-Contra, but wealth consolidation is what power is all about. Power to the People is exactly what the Fed is not about.

One of the Fed’s duties is regulating reserve requirements of member bank, currently 3% to 10%, depending….

Fractional-Reserve money creation, most simply: A bank at 10% reserve requirement gets a $100 deposit. The bank is allowed to lend $90 dollars of that deposit, so the original $100 dollars has become $190…and through subsequent lending, the bank may inflate the original $100 deposit into $1,000 dollars. A foundational transfer from those who create wealth, to those who manipulate wealth.

“Troubled Assets Relief Program”—taxpayers must relieve the global financial system of its bad bets. But….

The global financial system is a casino with private profit and public risk, thanks largely to something power keeps people from thinking about, much less understanding: Derivatives.

“Derivative” is a well-groomed way to say a side bet has been made on anything you might imagine. A Bloomberg article from October 18, 2011, described them this way:

Derivatives are financial instruments used to hedge risks or for speculation. They’re derived from stocks, bonds, loans, currencies and commodities, or linked to specific events such as changes in the weather or interest rates. 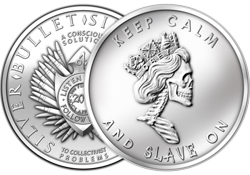 Taxpayers on the hook for, officially…$700 billion—or was that $800 billion, officially, to bail out Too-Big…! banks? Remember the ephemeral public outrage? The image of Treasury Secretary Henry Paulson (between stints at Goldman Sachs) going down on one knee to beg Speaker of the House Nancy Pelosi to pass TARP before the world imploded—that image should be tattooed upon the mass American consciousness.

However, MSM has minimized the image to barely a footnote that at least characterizes the science/art of bait-and-switch.

Taxpayer liability from TARP is closer to $23.7 trillion, and thanks to the Fed, forever inflating.

The Fed is a private agency not subject to the Freedom of Information Act, and the Fed threw enough power at reinforcing this fact to make it shocking that Congress mustered enough votes to actually force a peek into some of the Fed’s books.

Since the Fed serves the interests of its owners, the Government Accountability Office (GAO) “limited audit” gave MSM plenty to suppress.

Between December 1, 2007 and July 21, 2010, the Fed gave $16.1 trillion to banks and corporations around the world—loans virtually free, backstopped by the American public.

Recipients listed on page 131 of the “audit report”:

In the middle of December, 2012, the Fed announced another Quantitative Easing (QE-4). In addition to QE-3 creating new money to transform $40 billion of toxic waste on bank balance sheets into taxpayer liabilities, QE-4 bumps the monthly taxpayer tab up to $85 billion.

A quip amid Weimar Germany hyperinflation went something like this: “If a wheelbarrow full of money were left on the street, thieves would dump the money, and steal the wheelbarrow.”

How much more Quantitative Easing will it take to deliver America’s Weimar Moment?

Since the Federal Reserve Act in 1913, the dollar has lost 95% of its purchasing power.

In the four years since QE-1 (middle of the last “financial crisis”), the dollar’s value in gold has fallen more than 50%.

Early in 2012, the Federal Reserve Open Market Committee announced the Fed’s goal of devaluing the dollar 33% over the next twenty years.

We should have paid attention to Louis McFadden:

“The Federal Reserve (banks) are one of the most corrupt institutions the world has ever seen. There is not a man within the sound of my voice who does not know that this Nation is run by the International Bankers.”

“Some people think the Federal Reserve Banks are the United States government’s institutions. They are not government institutions. They are private credit monopolies which prey upon the people of the United States for the benefit of themselves and their foreign swindlers” (Congressional Record 12595-12603 — Louis T. McFadden, Chairman of the Committee on Banking and Currency June 10, 1932).

“The financial system has been turned over to the Federal Reserve Board. That Board as ministers the finance system by authority of a purely profiteering group. The system is Private, conducted for the sole purpose of obtaining the greatest possible profits from the use of other people’s money.” (Charles A. Lindbergh Sr., 1923)

Prominent Americans have long pointed out that the Fed is a private banking cartel designed to systematically destroy the dollar, drain wealth of the American public and crush the federal government with debt.

Ben Bernanke, current chairman of the Fed, actually told truth about the Great Depression in his speech at a University of Chicago conference honoring the 90th birthday of Milton Friedman, concluding with:

“Let me end my talk by abusing slightly my status as an official representative of the Federal Reserve. I would like to say to Milton and Anna: Regarding the Great Depression. You’re right, we did it. We’re very sorry. But thanks to you, we won’t do it again.”

MSM excels at suppressing leaked documents and defector testimony that clearly reveal the Fed’s zeal over the thousands of banks and farms they hoped to acquire for pennies on the dollar by inducing a depression. MSM has also protected the public from the truth that derivatives were at the heart of the 2008 financial crisis, and will define the next crisis.

Estimates of the notional value of the global derivatives market range from $600 trillion to $1.4 quadrillion. Webster Tarpley said this about derivatives:

“Far from being some arcane or marginal activity, financial derivatives have come to represent the principal business of the financier oligarchy in Wall Street, the City of London, Frankfurt, and other money centers. A concerted effort has been made by politicians and the news media to hide and camouflage the central role played by derivative speculation in the economic disasters of recent years. Journalists and public relations types have done everything possible to avoid even mentioning derivatives, coining phrases like “toxic assets,” “exotic instruments,” and – most notably – “troubled assets,” as in Troubled Assets Relief Program or TARP, aka the monstrous $800 billion bailout of Wall Street speculators which was enacted in October 2008….”

With their ownership of MSM, and history of doing whatever they want—including whatever it takes to protect their dollar entitlement, the Fed might seem impossible to root out. And regardless of how severely they try to complicate the whole Fed crime, our choice is exquisitely simple:

Kill the Fed or the Fed will kill us.

Our only other choice is limping from economic bubble to bursting economic bubble, hobbled by debt and drenched in austerity until we can limp no more. And if MSM ever publicly calls derivatives, “derivatives”, it’s far too late. The imminent financial crisis will render public interest a ghost from a distant past.

The only epoch offering Americans a future: the Fed, AD.

The Fed, after death.

Bela Lugosi liked to say, “There is no…other way.”