Once again this past election I could not find a candidate that I could whole-heartedly support. If I voted for a non-major party candidate (in my case, the Libertarian Party candidate), I ran the risk of contributing to the election of my least-favored major-party candidate. There is an obvious solution to this dilemma. I am referring to preferential or ranked-choice voting.

A version called instant runoff has been used in parts of the United States and in a number of other countries. In this system, if no candidate receives a majority of first choices, then the candidate with the least number of first-choice votes is eliminated and his/her second choice receives his/her vote. This continues until one candidate has a majority.

The problem with this system is that it makes it nearly impossible for a non-major party candidate to win in a three-party contest. In my opinion, an ideal system would provide at least some chance for a non-major party candidate to win. Two viable parties are not enough to provide a decent variety of choices. In my opinion, a minimum of four to five parties would be needed in order to cover at least many of the possible combinations of views on important issues and political philosophies.

This would eliminate the expense of runoff elections and still produce a winner with majority support at some level. There could be other desirable effects from having more choice of candidates. There has been much comment in recent years that American politics has become overly polarized. I would think that the existence of three or more viable candidates would make for a more wide-ranging debate and for a more thorough discussion of the issues, and maybe even less polarization. With just two viable parties there is an incentive to try to appeal to the middle and to blur stands on issues rather than to have a deep, more precise, thorough and thoughtful discussion of issues. In order to make intelligent, thoughtful decisions on issues, clarity is desirable, rather than the blurring of thought which can occur with just two candidates.

Having more than two choices could produce some candidates who would be less prone to pander to voters’ preconceived opinions since they do not have to get a majority of first choices to be viable, and instead attempt to promote and educate voters about their own considered viewpoints. In other words, more leadership and less self-serving pandering could possibly be encouraged. Wouldn’t it be great if elections could be educational opportunities where voters learned about different political and economic philosophies and their implications for current issues? This may seem naively idealistic, but I think that it would be desirable for the electoral system to at least make this possible. Now elections are more about pandering, vote buying and an appeal more to the voter’s short-term self-interest than to a rational concern with the long-term greater good. Smaller parties would have more opportunity to grow over time, as they educate the voting public about their ideas. 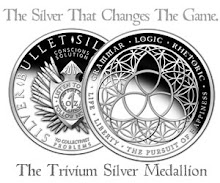 This would entail more immediate cost to set up. Voting machines would have to be programmed to do the necessary tabulations. Actual calculation of the result would have to be done at a central location. If the present machines could not be programmed to do the job, new machines would have to be bought. A voter education program would be needed in order to prevent too much voter confusion with the new system. Much less resources on voter education would be needed in subsequent elections as voters become familiar with the new system. Personally I think that the benefits to our republic would outweigh the costs.

For this to happen, the media would need to be more open to including non-major party candidates in their coverage, and debate sponsors would have to be more inclusive in allowing parties into debates. The emphasis should be on maximum practical inclusiveness not on excluding parties. I think that it is really unfair not to include parties which are on the ballot in the overwhelming majority of states (such the Libertarian Party-49 states and the Green Party-44 states). Would it be too cumbersome to have 4 debate participants? I would think not. Do the sponsors believe that the average voter’s attention span is too limited to consider more than two points of view? I say, give the voters the benefit of the doubt.

One major obstacle to greater voter choice is the opposition of the 2 major parties through their control of the Commission on Presidential Debates which was established in 1988. The debates prior to 1988 were hosted by the League of Women Voters. In 1988 it withdrew, making this statement: “the demands of the two campaign organizations would perpetrate a fraud on the American voter”. That year the campaigns of George H. W. Bush and Michael Dukakis met secretly to limit who could sit in the audience, and who would serve as panelists, and they also abolished follow-up questions. (In 1984 nearly 100 proposed panelists had been vetoed jointly by the Republicans and Democrats.)

Starting in 1988 the debates and the information that the public is allowed to have through the debates has been overtly controlled by the 2 major parties, a fox-guarding-the-hen-house type of situation. For example after Ross Perot got 19 percent of the vote in 1992, the foxes decided in 1996 that he was too much of a threat and excluded him from the debates, thus perhaps ending the national threat to them of the Reform Party for good. If enough people know about this control and protest perhaps the debates would be forced to be more inclusive. This year, three debate sponsors dropped their support for the debates over the exclusion of Libertarian candidate Gary Johnson.[4]

It is truly regrettable that the voters are for all practical purposes limited to a choice between only two viable political parties due to the nature of the electoral system. Most people seem to feel that if they vote for a candidate outside of the two major parties that they are throwing away their vote and possibly contributing to the victory of the major-party candidate that they like least. Changes need to be made.