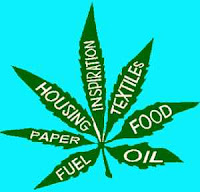 In a victory for freedom and common sense, it appears that marijuana will be legalized for recreational use in Colorado. Amendment 64: Regulate Marijuana Like Alcohol is leading 53.36% to 46.64% with 36% of the total vote reported.

Amendment 64 legalizes the personal use, possession, and limited home-growing of marijuana legal for adults 21 years of age and older; establishes a system in which marijuana is regulated and taxed similarly to alcohol; and allows for the cultivation, processing, and sale of industrial hemp.

In particular, the law removes all legal penalties for personal possession of up to one ounce of marijuana and allows people to grow up to six marijuana plants at their home in an enclosed locked space.

A study by the Colorado Center on Law and Policy found that marijuana legalization could produce more than $120 million annually in new revenue and savings within the first five years. Wholesale recreation cannabis in Colorado will be taxed at 15% with the first $40 million allocated to the Public School Capital Construction Assistance Fund.

In addition, its passage is expected to create a plethora of new jobs, especially in industrial hemp. Hemp is a non-psychoactive strain of the cannabis plant and an agricultural crop that is widely cultivated across the globe for its seed and fiber. Hemp has thousands of modern industrial uses from paper, textiles, construction materials, fuel, to dietary supplements. Significantly, it is much more sustainable than current competitor materials. Watch the video below for the potential of industrial hemp:

Two other states, Oregon and Washington, are also voting on similar measures. Early results show Washington state will likely legalize marijuana as well with the Yes votes leading by double digits for Initiative Measure 502. Meanwhile it appears Oregon’s Measure 80 is headed for defeat.

Massachusetts also voted by a dominant margin (63%) to legalize medical marijuana bringing the total number of medical cannabis states to 18.

How Authoritarian Top Down Control Is Being Imposed on the World

The COVID19 Pandemic is the Beginning of Medical Martial Law

Two Hundred and Thirty Years of Rights and Liberties… March 24, 2020