Voter turnout expected to be lower than 2008, US President’s mandate ranges between 25-35%.

Here is some math the establishment hopes you never do. Take the popular vote the newly elected president received, and see what percent of voter turnout it actually makes up. You will find that out of all eligible voters, the president is put into power with only between 25-35%. This isn’t just with President Obama in 2012, but is a common feature of most US elections, and many elections around the world. 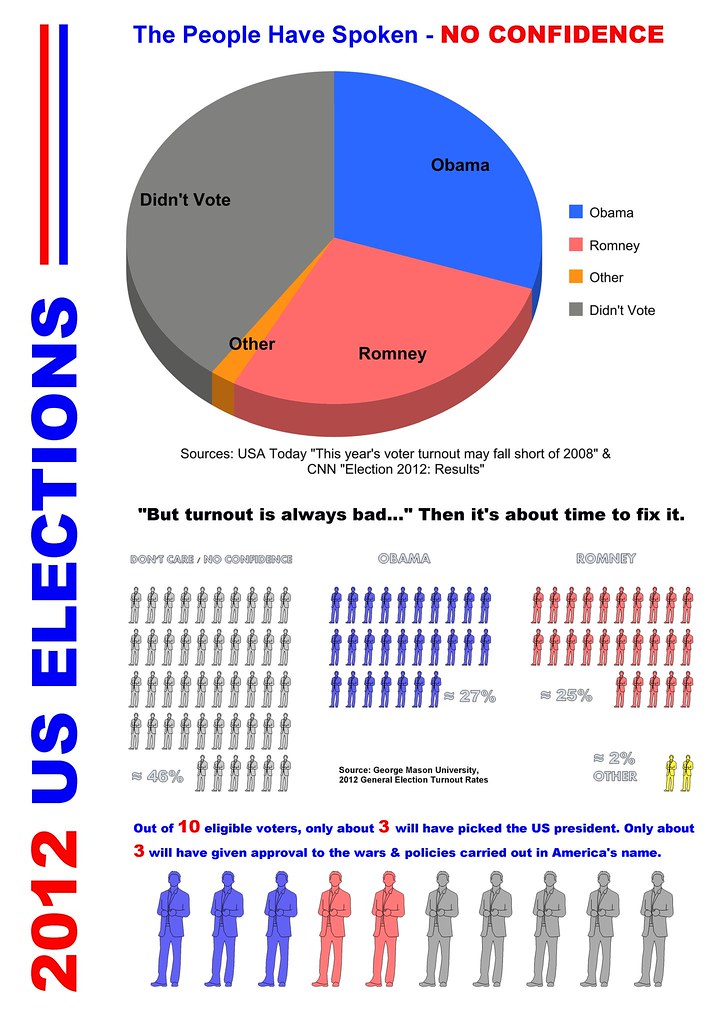 Image: This infographic was assembled using information from CNN’s  “Election 2012: Results,” USA Today’s “This year’s voter turnout may fall short of 2008,” and George Mason University’s “2012 General Election Turnout Rates.” The numbers may still change, but the difference will be negligible.

In countries like Thailand, where violent mobs hold the nation hostage, representing a fraction of 1% of the population, it is claimed by the Western media that these are “the people.” Come election time, the Western-backed party claiming to run on “people’s power,” garnered the support of a measly 32% of all eligible voters. Likewise in Syria, where “the people” are rising up, in a nation of 20 million – if even half rose up armed with only broom handles, the so-called revolution would have been over in a week.

This is the myth of democracy, representative governance, and manufactured dissent. It does not represent the vast majority of the people who are affected by the decisions these governments or movements then make with their self-proclaimed mandates. While numbers are still coming in, USA Today has reported that voter turnout in the 2012 US Elections most likely will fall short of 2008 elections. The article titled, “This year’s voter turnout may fall short of 2008,” quoted Michael McDonald of the George Mason University who stated:

It doesn’t look like we had a 2008-level turnout. I’m certain about that. There was some waning of interest in voting. I don’t see this election as some kind of wholesale collapse of turnout, either.

While polling experts claim the slump in voting is a result of “waning interest,” it really isn’t explained as to why interest in determining one’s own destiny would ever wane. The most likely answer is that many people feel that voting accomplishes nothing. It is done after a grueling, repetitive campaign of lofty, vague promises that most mature adults know will never be kept, by special interests who have organized against them, and are merely telling us all what we want to hear as they proceed to exploit us and plunder our nation.
The next question becomes, what do we do about it?

Be the first to comment on "2012 US Elections – The People Have Spoken: No Confidence"