The issue which has swept down the centuries and which will have to be fought sooner or later is the people versus the banks. — Lord Acton

I published Frackin’ Reserve!, a fractional reserve banking simulator (desktop version here, web version here), with the promise to follow-up with another article explaining it. After hitting 5,000 words, I realized that I needed to do a series.

Part 1 explains the basic mechanics of fractional reserve banking in very simple terms with examples. Part 2 answers “What is Money?” for the purposes of the discussion.

Part 3 illustrates how and why fractional reserve banking is fraudulent. Part 4 shows how the system can fall apart, and two attacks that the banksters can use to steal wealth from people. Part 5 examines usury and compound interest as forms of invisible slavery. Part 6 is a quick summary with links to other resources.

Each part builds on the previous, so it is strongly recommended to read through in order. Even if you have a solid understanding of fractional reserve banking, there are a few new twists that I add to the traditional understanding of it that could be missed.

The 3 Factors in Fractional Reserve Banking

If you haven’t already, download the Frackin’ Reserve! simulator program, visit the web edition page, or click here for a pop-up with the web edition.

So the basic mathematics of the system are extremely simple. Stated in general: 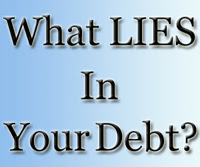 But it doesn’t stop there. Once a loan is made, the person that receives the loaned money goes out and spends it to obtain some form of wealth in the real world. That could be a house, a car, a guitar, groceries, a meal at a restaurant, or anything that can be purchased. The seller of the product or service then takes that money, goes back to the bank, and deposits it. That deposit is then subject to the same reserve requirement with the remainder being made available for the bank to loan out again.

Breaking the whole thing down into a simple ordered list, fractional reserve banking follows this pattern:

Step 1 kick-starts the system the same way that you would kick-start a motorcycle. The government can always inject more money into the system, but every time it does, it starts this fractional reserve banking process over again with that money.

Step 2 is where the “magic” of fractional reserve banking happens. The legal requirement to keep only a small portion of a deposit gives the bank the “right” to print money out of nothing. This is explained in detail in Part 3.

Step 5 is nothing more than running through steps 2-4 again for the entire cycle to start over. This is the second “magic” of fractional reserve banking because it creates a an iterative feedback loop for money to multiply itself. Aristotle called the process of money multiplying itself “the most unnatural”.

For money was intended to be used in exchange, but not to increase at interest. And this term interest, which means the birth of money from money, is applied to the breeding of money because the offspring resembles the parent. Wherefore of all modes of getting wealth this is the most unnatural. — Aristotle

While he was speaking of interest, and not fractional reserve banking, the principle “the birth of money from money” is still the same.

If you view the bank’s keeping a reserve as an independent step in the process, then the cycle looks like this: The people spend and deposit, while the bank loans out the money, less the reserve requirement.
The following graphic illustrates the process of fractional reserve banking as described above. (Click to zoom.) Putting that into a table so that you can visualize it differently:

As the cycle continues, the amount of money that the bank has loaned out approaches a limit:

Also, the total amount of money that people have deposited into the bank approaches a limit (this is formally called the “money multiplier“):

And, the amount of money that the bank holds in reserve approaches a limit:

The following table illustrates how this happens over many iterations in the fractional reserve banking system:

Looking at some of the equations above again: Notice that as the reserve requirement becomes lower, the amount of money that a deposit can generate becomes higher and higher.

And remembering back to what the “Reserve Requirement” is: A number between 0 and 1.

What happens when the reserve requirement is zero? Any idiot can tell you that you cannot divide by zero. Dividing by zero results in an infinity, which is absurd (for mathematical purposes like this). You just cannot do it.

You cannot divide by zero… Unless you live in Canada, Australia, New Zealand, or Sweden where the reserve requirements are all ZERO! Apparently the Canucks, Ozzies, Kiwis, and Swedes have all forgotten about this little thing we call sanity. (Hmmm… Perhaps that explains me…)

Frackin’ Reserve! only allows very low values for reserve requirements because no computer can process “1 ÷ 0”.

The Speed of Fractional Reserve Banking

The last thing to mention about fractional reserve banking mechanics is that it only happens when money is deposited into a bank. That is if I buy a guitar pedal from Adam for $100, and he uses that money to buy $100 of marijuana from Brian, who buys $100 of raw milk from Chris, the fractional reserve system never comes into play, and the banks cannot fabricate any money out of thin air.

HOWEVER… If all money is made digital, and all transactions are electronic, such as through NFC (Near Field Communications) (read my article on “How You Are Being Indoctrinated for NFC” here), then ALL money for ALL transactions goes through the banks and thus through the fractional reserve banking system. This accelerates the pace of fractional reserve banking far above the state that it is in now. It is a massive power transfer to the banks.

Is it any wonder the bankster criminals, corrupt politicians, and corporatists are urging us towards electronic money? (The objection to this is that a money transfer also transfers reserve requirements. However, this is quite beside the point when it comes to the digital velocity of money.)

So there are the mechanics of fractional reserve banking in a nutshell.

Money is the most important subject intellectual persons can investigate and reflect upon. It is so important that our present civilization may collapse unless it is widely understood and its defects remedied very soon. — Robert H. Hemphill, Federal Reserve Bank of Atlanta

Ryan Smyth is a Canadian expat currently living in Australia. He works in software, but is passionate about many current issues and the impending demise of freedom and privacy. He can be found blathering on (and sometimes ranting) at his blog, Cynic.me.