In this 10-minute entry into Alex Jones’ wildly popular video news contest, info-warriors gathered in New Orleans to give a brief background on chemtrails and genetically modified foods, bringing an update from Vermont on its GMO-food label bill. Our research begs the eugenics question: Who are the transhumanists to decide for all of humanity that Homo sapiens should evolve into a part-machine post-human?

Here are the sources we used, in order of appearance:

United Nations, “Convention on the Prohibition of Military or Any Other Hostile Use of Environmental Modification Techniques,” Resolution 31/72, 10 Dec 1976, effective 1978. Geneva. http://www.un-documents.net/enmod.htm

Anonymous, “CASE ORANGE: Contrail Science, Its Impact on Climate and Weather Manipulation Programs Conducted by the United States and Its Allies,” 10 May 2010. PDF without appendices:http://coto2.files.wordpress.com/2010/07/case_orange-5-10-2010-belfort-chemtrails.pdf

Raphaelle O’Neil Former reporter on New Orleans Live’s Raphaelle’s Artistic Reports, and 2-time Storer Boone Award Nominee, Raphaelle has had her heart broken by disaster on more than one occasion, each time transgressing her pains on the stage in the form of performance art and poetry. Wearer of many hats, she recently extended her hand from the healing arts of Massage Therapy, to the healing arts of “SPEAK UP” therapy.

David K. Jarreau An ambulance professional by trade, Dave brings much talent to the team, handling all of the audio, video and production edits. Deeply religious, he gets his news from InfoWars.com and supports Ron Paul for US President. He lives in the rural offskirts of Baton Rouge with his wife and two children. Find him on Facebook.

Michael DiBari Writer, artist, philosopher, dreamer, pessimist, fighter for lost causes, Mike confronts the New World Order on a daily basis in New Orleans. Some of his art can be viewed at cotocrew.wordpress.com/mr-ms-best/ For a full list and to buy or sell his work, contact here.

Rady Ananda is the creator of Food Freedom News. Her work has appeared in several online and print publications, including four books. She holds a B.S. in Natural Resources from The Ohio State University’s School of Agriculture. She is LinkedIn and tweets her own work from @RadysRant; while tweeting hers and others’ from @geobear7.

Dave brought the pro-equipment for our shoot. Here’s Raphi in the studio, with green screen, umbrella lights and camera monitor:

Here’s the four of us in front of the Louisiana Supreme Court on the day of our street-scene shoot: 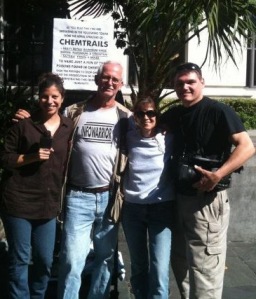 Special Thanks:
Alex Jones at infowars.com

And all the others who contributed in meaningful ways to this project.

(Maybe next time, Wayne Madsen! Thx for the short-but-sweet meet; best to you and yours.)


You can support this information by voting on Reddit:
http://www.reddit.com/r/conspiracy/comments/t09cj/chemtrails_gmos_and_transgenics/

cc Creative Commons. This work may be reproduced in whole or in part as long as the original URL and author name are included.

Be the first to comment on "Chemtrails, GMOs and Transgenics"