Media mogul Sondhi Limthongkul of ASTV, a popular news and media outlet in Thailand, gave a 2-hour talk on Friday night (in Thai) regarding the corporate-funded Council on Foreign Relations (CFR), the National Endowment for Democracy (NED), USAID, Human Rights Watch (HRW), and Amnesty International amongst others and their role in destabilizing nation states around the world and in particular their unfolding plot in Thailand itself. 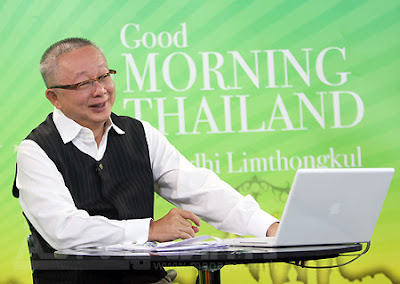 Image: Sondhi Limthongkul – media mogul turned infowarrior – goes from rallying crowds to informing them. Malaysia has used this tactic to great effect against globalist meddling in their sovereign affairs — one can only hope Thailand is starting down a similar path.

No punches were pulled, and the talk was accompanied by a news story on the ASTV website, Manager.co.th (in Thai), complete with graphics illustrating the documented ties between foreign corporate-financier interests and seditious elements within Thailand working with them. Image: From Manager.co.th illustrating the globalist tentacles reaching into Thailand and their willful Thai helpers. (click image to enlarge)

Sondhi’s narrative encapsulates the underlying cause of over 6 years of political instability plaguing Thailand and focuses on Wall Street and London’s proxy of choice, Thaksin Shinawatra.

Thaksin Shinawatra, Thailand’s prime minister from 2001 until a military coup removed him in 2006, was a former Carlyle Group adviser and was literally reporting to the globalist Council on Foreign Relations in New York City on the eve of his ousting from power. While in office, Thaksin attempted to ramrod through the US-Thailand Free-Trade Agreement (FTA) without parliamentary approval, a 2004 FTA backed by the exact same US-ASEAN Business Council recently visited by Thaksin’s “red shirt” street mob leaders in April of 2011.

Image: The US-ASEAN Business Council, a who’s-who of corporate fascism in the US, has been approached by Thailand’s “pro-democracy” UDD for support. The UDD never fully explains what corporations like Exxon, BP, Goldman Sachs, Monsanto, or other banes to humanity have to do with democracy or what sort of support was asked for or promised. (click image to enlarge)

Thaksin more recently had his own sister run in his place for elections in July 2011, as he is a convicted criminal currently in hiding abroad, evading a 2-year jail sentence. Thaksin’s proxy political party, with heavy rhetorical support from the Western media, including threats from the notorious Council on Foreign Relations to allow Thaksin’s proxy party to take power unhindered, won the elections with only 35% of eligible voters behind them. Despite gaining power, Thaksin’s legitimacy and support base is now exposed in full-light of the recent election as tenuous at best and still faces an entrenched Thai establishment and Thailand’s powerful military.

All of this documented information, once exclusively in the realm of the alternative media, has now been splashed across Thailand’s mainstream via Sondhi’s Friday presentation. ASTV’s Manager.co.th is ranked 14 in Thailand (a nation of over 65 million people) by Alexa and rivals Russia’s RT in readership. This is a promising first step in holding a real, fully informed debate regarding the political future of Thailand, Southeast Asia, and globalization in general. Sondhi also mentioned America’s “Pacific Century,” which includes integrating ASEAN not only as a regional superstate to rival China, but to integrate all of Asia into the Wall Street/London international order, or as Sondhi referred to it, the “Washington Consensus.”

Those behind this creeping integration, analogous to that of the European Union implemented incrementally against the will of the people, will now have to face an increasingly informed public who will realize and begin balking the rise of globalization long before early successes built on deception take them by surprise.

Lifting the Rock, Exposing the Snake

It should be mentioned that following Sondhi’s presentation, US State Department-funded Prachatai immediately responded by insisting that its millions of baht a year from the US government via NED “has no bearing on its news coverage.” This even after NED’s open involvement with undermining and overthrowing governments throughout the Arab World during 2011 has become a matter of public record, including a full admission printed in the New York Times titled, “U.S. Groups Helped Nurture Arab Uprisings,” which stated:

The Republican and Democratic institutes are loosely affiliated with the Republican and Democratic Parties. They were created by Congress and are financed through the National Endowment for Democracy, which was set up in 1983 to channel grants for promoting democracy in developing nations. The National Endowment receives about $100 million annually from Congress. Freedom House also gets the bulk of its money from the American government, mainly from the State Department.

NED’s duplicity is nothing new. Noam Chomsky in 1993 said of NED’s projects in Nicaragua that, “it’s about what you would expect from a bipartisan democracy campaign – it’s an attempt to impose what is called democracy, meaning rule by the rich and the powerful, without interference by the mob but within the framework of formal electoral procedures.” Additionally it was noted in Australia’s Southern Cross University’s “Activating Human Rights & Peace (AHRP)” conference through a revealing account of their 2008 proceedings that NED was carrying out “a lot of work that was formerly undertaken by the CIA.”

Indeed, Prachatai and NGOs like it have a lot to answer for. Like lifting a rock under which a venomous snake hides, Sondhi has exposed not just Prachatai, but the greater globalist plot against Thailand within which Prachatai plays a role. Now are dangerous times for Thailand and the world as a whole. As nations begin lifting up the rocks and shining the light of truth on the globalist agenda, the corporate-financier elite have two options, strike out or run.

The truth and scale of the crimes committed by the global elite means that running is out of the question. There is no where for a global criminal to run to when the entire planet is the crime scene. They will strike, the question is — will we be ready?

Sondhi, for his part, has already had an attempt made on his life. In April 2009, gunmen sprayed his vehicle in broad daylight with over a hundred bullets. One bullet grazed his head but he ultimately survived the ordeal. No doubt there will be many displeased with his most recent and thorough presentation exposing the tentacles of Wall Street’s 0.1% making their way into Thailand using the camouflage of “human rights,” “democracy,” and “freedom of speech” to mask their true intent. Camouflage is decidedly less effective when one knows what to look for. A predator or parasite depending on this rouse will be considerably less effective in an environment of informed vigilance. Image: Sondhi’s vehicle in April 2009 after being attacked in broad daylight by armed “critics” from opposing political cliques, most likely those of Thaksin and his UDD – notorious for their acts of murder and mayhem. By adding our voices behind those daring to speak the truth, we make it less effective to commit acts of violence against individuals exposing the system.

Let us continue to undermine the abilities of this predatory-parasitic system by continuing to speak to the truth, identity the source of their corporate-financier power, boycott and entirely replace their self-serving system with one that serves the interests of we the people. By getting active we help diminish the abilities of the global elite and make attempts of violence against those leading the cause of freedom more difficult and less viable, not only in Thailand, but around the globe.