It is the writer’s hope that this last installment of our Lyme series connects people to real help in getting their lives back from this menacing, covered-up disease. The first part delves into complications of detection and the last part into things to be careful for and some real options for relief.

The corrupted Infectious Diseases Society of America wrote guidelines on tickborne diseases that included Lyme, Human Granulocytic Anaplasmosis, and Babesiosis. But the rise of Babesiosis, Ehrlichia (moving through Wisconsin and Minnesota), and other newly discovered vector-borne disease are more threatening in the lack of early symptoms and undetected presence in blood supplies. So those suffering from the many tickborne infections are going to have the same runaround as Lyme victims. Those with the malaria-like Babesiosis parasite and other vector-bornes can also have Lyme and vice versa — plus a variety of debilitating co-infections.

Actually, there are around 137 different strains of Lyme and its sister tick-borne diseases, but only two are the most investigated and treated. Since it’s so shrouded in silence and ignorance, most blood banks don’t even screen for it and untold many don’t know they are infected.

One Northern US naturopath said in a phone interview that he helps with 2-3 cases per month and the clients don’t realize it’s there. Many don’t recall a tick bite, never saw the bullseye-rash, and sought his help after being diagnosed and unsuccessfully treated for Lupus, Fibromyalgia, Chronic Fatigue Syndrome, and the “incurable” neurological diseases that are alarmingly on the rise in young people. He had to help his wife with undetected Lyme, and Lyme is no longer a part of her life.

Prevention is ideal, but obviously not foolproof. It can be spread through not only ticks, but mosquitoes, blood transfusions, sexual contact, and even flies. A tick bite or rash need not be present to have Lyme. This is all crucial information denied and silenced by the IDSA mob. Imagine if the world still did not understand AIDS, and it continued to spread by these means with no help offered by conventional doctors – except for their approved drugs. Then they tell the AIDS patient, after a couple weeks, that they are cured and any issues must be in their head. That is the situation we are currently facing. The political-medical battle over Lyme and newly discovered vector-borne disease was left to the dogs from the beginning. Many have struggled and found their own way, with alternative doctors and unconventional methods. The CDC would like you to believe that such unfortunates stumble on “goat’s blood” and false promises of stem cell help, but we know better than that.

Unfortunately, Under Our Skin only covered Lyme-literate doctors who were using aggressive antibiotic treatment for progressive Lyme. Even some of those doctors had their licenses revoked or were compelled to close their practice. Constant use of antibiotics are harsh and leave people with more health problems, possible resistance, and Candida yeast overgrowth. Many patients are stuck in a cycle of taking antibiotics for years because if they stop, the spirochetes come back and they feel ill again.

Good naturopathic doctors have an affinity for detecting and treating bacterial and parasitical infections. This is why it is so important that we continue to protect their rights to help their clients. There are sites to help you locate one, but it is also preferable to talk to trusted people in your area to find one that can help your specific situation. They should have Lyme knowledge, and ideally some way of detecting it in your body such as bio-energetic feedback or a field microscope.

Very important: most people with Lyme are already familiar with using caution during any type of detox. Killing off the immense amount of spirochetes requires the body to quickly dump them. Not being able to rid the die-off causes intoxification, also known as a Herxheimer Reaction (healing crisis). The Herx effect is the “feeling worse, before feeling better.”

Following through with a program can be tedious but do-able. The bacteria go in cycles from cyst to spirochete and need to be killed in adult form – so a long program ensures that all the bacteria eventually die. Killing off the bacteria is only one part, rebuilding the immune system and organ health are equally crucial. Colloidal silver is a must-have for every home and difficult disease. The high-voltage AC-made silver is the best indicated for Lyme patients due to its smaller micro-particles and efficiency for eradicating the spirochetes. Ideally, the silver should be 500 parts per million.

Lyme nosodes is a homeopathic that operates from the theory of “like cures like.” The Lyme disease goes through a potentization process where it is removed from itself millions of times, and all that is left is a frequency that cancels out the indicated disease in the body. There are nosodes available for all kinds of conditions such as flu.

The following are also great helps:

For many more, visit this great compilation of alternative therapies and other resources!

Please consider only doing a protocol with supervision from your chosen healthcare practitioner. Again, because of the Herx effect you want a gentle and thorough program. 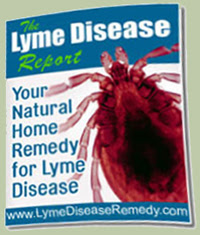 It is also strongly recommended to increase fluid intake, eat lots of organic produce (non-organic increases the toxic load for the liver) and get plenty of moderate exercise. Be careful not to overexert, but moderate daily exercise increases the blood and lymph flow, which coaxes the spirochetes out of their hiding places allowing them to be killed off with your regimen and oxygen.

The deliberate deceit, cover-up, and profiting from the physical and emotional suffering of Lyme victims is downright revolting. It is so shameful that it has taken so long for helpful resources to surface, but there is truly hope.

Please share this with Lyme patients and any who are suffering untreated for Fibromyalgia, Lupus, M.S., ALS, Alzheimer’s, Parkinson’s, dementia and Chronic Fatigue Syndrome. And for those who are told nothing’s wrong, or that they should see a psych doctor.

It may give them the relief of finding out what is actually wrong, validate them (they are not crazy, it is not in their heads), and point them on the path to getting their life back. You may be the turning point for someone’s healing – or your own!

Your stories, testimonials, and comments are welcomed below!

This series is dedicated to Lyme patients everywhere and in loving memory to the ones we have sadly lost.

Note: Activist Post, the writer, and the interviewee are not affiliated with the programs mentioned in this article.

Be the first to comment on "Effectively Treating Lyme (part 3)"