The global economy has become so incredibly unstable at this point that it is not going to take much to plunge the world into a horrific economic nightmare.  The foundations of the world economic system are so decayed and so corrupted that even a stiff breeze could potentially topple the entire structure over.  Over the past couple of months a constant parade of bad economic news has come streaming in from Europe, Asia and the United States.  Signs of an impending economic slowdown are everywhere.  So what “tipping point” will trigger the next global economic downturn?  Nobody knows for sure, but potential tipping points are all around us.

Today, the global economic system is even more vulnerable than it was back in 2008.  Virtually none of the systemic problems that contributed to the 2008 collapse have been fixed.

Mark Mobius, the head of the emerging markets desk at Templeton Asset Management, was recently was quoted in Forbes as saying the following….

There is definitely going to be another financial crisis around the corner because we haven’t solved any of the things that caused the previous crisis.

The “financial reform” law that Barack Obama and the Congress passed a while back was a complete and total joke.  They might as well have written the law on toilet paper for all the good that it is doing.

We did not learn from our mistakes and our future economic lessons are going to be even more painful.

The world is drowning in a mountain of debt, the global financial system is packed to the gills with toxic derivatives, everyone is leveraged to the hilt and the dominoes could start falling at any time.

So what will the tipping point for the next collapse be?

The following are some potential nominees….

Tipping Point #1: Syria
Syria is a situation to watch very, very closely.  The Syrian government is in a lot of trouble right now. Sadly, the instability inside Syria probably makes war with Israel even more likely.

Make no mistake – a war between Israel and Syria has been brewing for a long, long time and at some point it will happen. When it happens, the entire Middle East may erupt in warfare.

Just the other day, a very troubling incident happened in the area around the Golan Heights.  The following is an excerpt from a report by The Daily Mail about the incident….

“About 20 pro-Palestinian demonstrators were killed and 325 injured yesterday when Israeli forces opened fire on them as they crossed the border from Syria into occupied territories, according to reports.”

At this point, the Syrian government is probably glad that the attention has been taken off of them at least for a while.  The Syrian government has been getting a lot of bad press lately.  The following is an excerpt from a recent report by Human Rights Watch about the treatment of protesters inside Syria….

“The methods of torture included prolonged beatings with sticks, twisted wires, and other devices; electric shocks administered with Tasers and electric batons; use of improvised metal and wooden ‘racks’; and, in at least one case documented by Human Rights Watch, the rape of a male detainee with a baton.

“Interrogators and guards also subjected detainees to various forms of humiliating treatment, such as urinating on the detainees, stepping on their faces, and making them kiss the officers’ shoes. Several detainees said they were repeatedly threatened with imminent execution.”


So in light of the “precedent” that we recently set in Libya, does this mean that we will be “forced” to conduct a “humanitarian mission” inside Syria as well?

Syria is one tipping point that we all need to keep a close eye on. The Iranian nuclear program is in the news again. A new report by RAND Corporation researcher Gregory S. Jones claims that Iran could have a nuclear weapon within 2 months.  His report is based on recent findings by the International Atomic Energy Agency.  According to Jones, airstrikes alone would be incapable of stopping Iran’s nuclear weapons program at this point.  Instead, Jones says that a “military occupation” would be required.

It is a minor miracle that a war with Iran has not erupted yet.  It seems almost inevitable that at some point either the United States or Israel will use military force to try to stop Iran’s nuclear program.
When that happens, it is going to cause a major shock to the global economy.

Tipping Point #3: Libya
NATO has made it abundantly clear that Moammar Gadhafi will no longer be tolerated.  In fact, NATO apparently plans to reduce Tripoli to a heap of smoking ruins if that is what it takes to bring about the fall of Gadhafi.

What a “humanitarian mission” we have going in Libya, eh?  It turns out that NATO believes that the United Nations gave it permission to bomb television stations and to make attack runs with helicopters.
Russian Deputy Prime Minister Sergei Ivanov recently said that by using attack helicopters, NATO has moved dangerously close to turning the Libya operation into a ground invasion….

Using attack helicopters, in my view, is the last but one step before the land operation.

So why is Libya a potential tipping point?

It isn’t because Gadhafi is a threat.  He is toast.

It is because the rest of the world is watching what is happening in Libya, and that is raising global tensions.

Even if Gadhafi falls, the Libyan operation will still be a failure because it has brought us all significantly closer to World War III. 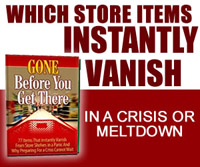 Tipping Point #4: More Revolutions In The Middle East
The revolutions throughout the Middle East earlier this year sent oil prices absolutely skyrocketing and they have remained at elevated levels.

And in case you haven’t noticed, revolutions continue to sweep the Middle East.

Have you seen what has been happening in Yemen lately?

Yemeni President Ali Abdullah Saleh has burns over 40% of his body and he has suffered a collapsed lung as a result of a recent attack.

If violence and protests throughout the Middle East become even more intense as the weather warms up this summer that could have a very significant impact on world financial markets.

Tipping Point #5: Fukushima
The mainstream news has gotten a bit tired of covering it, but the situation at Fukushima is still a complete and total disaster.

Japan’s Nuclear Emergency Response Headquarters admitted on Monday that three reactors experienced “full meltdowns” in the aftermath of the earthquake and tsunami in March.

Did it really take them nearly three months to figure this out, or were they lying to the rest of the world all of this time?

The truth is that the nuclear disaster at Fukushima is far worse than the mainstream media has been telling us.  If you doubt this, just check out this excellent article or this article by Natural News: “Land around Fukushima now radioactive dead zone; resembles target struck by atomic bomb“.

The economic impact of the Fukushima disaster is going to continue to unfold over an extended period of time.  It turns out that Japan is now officially in a recession.  Their economy contracted at a 3.7 percent annualized rate during the first quarter.