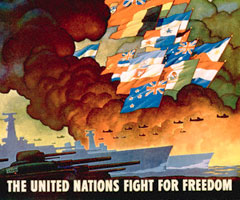 The media hailed Warren Buffett last December for donating $50 million dollars toward a United Nations nuclear bank with control over uranium enrichment.  The intent is control over nuclear weapons and nuclear power by the elites who are the true forces behind the UN.

The UN nuclear bank is will be under the authority of the International Atomic Energy Agency (IAEA), which is NOT independent; it was created through a UN treaty and answers to the UN and the UN Security Council.  The fully funded UN nuclear bank does not require nations to stop uranium enrichment, which was the original plan; however, the final terms have not been set.  The fuel bank will sell enriched uranium for power plants to countries in “good standing“.  Therefore, only countries who kow-tow to the UN and IAEA will be provided with enriched uranium.

The United Nations is a supranational entity that answers to no one.  After WWII, the UN was sold to the public as an voluntary collection of nations committed to peace and ending war.  The UN pretends to vote on issues democratically, but its true goal is a totalitarian world government ruled by the elites at the top.  They are happy to bully countries and go to war over resources, as evidenced by the UN resolution last week to attack Libya.  They claim that war is necessary for peace.

The UN nuclear bank will consolidate power under the UN for nuclear energy and weaponry, which is another piece of UN Agenda 21, the blueprint for total control and depopulation.

UN WORLD DOMINANCE
Four things are needed to take political control over a population (the UN has set its sights on the entire world):

If you have enough money and an army, then control over the media and education are useful but not essential. UN NUCLEAR BANK FINANCING
Warren Buffet proposed the UN nuclear bank and made a self-serving “donation” of $50 million while demanding matching funds of $100 million from governments.  Obama provided $50 million in US taxpayer money and the EU, UAE, Kuwait and Norway made up the rest.  At $150 million, world domination is astonishingly cheap!  Buffett, a proponent of depopulation, was celebrated as a hero in the media because most people are ignorant about the UN’s true goals.

Warren Buffett is in the energy utility business and owns MidAmerican Energy; his motivation for “donating” to the UN nuclear bank could benefit him later with regard to a UN monopoly over nuclear power for electricity.

Taxpayers will ultimately fund the UN nuclear bank that is in opposition to public interest and freedom.  This trick is accomplished through foundations convincing governments to regulate or take action on an issue and then passing the cost on to taxpayers (click here to find out how individuals create public policy that has been used for depopulation).

Nunn, Kissinger, Schulz and Perry are aggressively pushing the dismantling of nuclear weapons through the US-Russia-UN START Treaty and the UN Non-Proliferation Treaty.  The objective of these types of treaties, according to Department of State Publication 7277, is to disarm states to a “point where no state would have the military power to challenge the strengthened UN Peace Force….”
Buffett has provided funding for the Nuclear Security Project, too.  Buffett said that an atomic attack on the US by mid-century is a “virtual certainty”.  In my opinion, with psychopaths like Buffett, Turner and Kissinger (a Rockefeller lieutenant) at the helm, this is practically unavoidable. CONCLUSION
As sovereign countries dismantle their nuclear weapons under UN treaties, the UN is simultaneously building its nuclear arsenal by way of the nuclear bank.

Additionally, the UN is locking in another uranium enrichment monopoly over nuclear power for electricity, which will also increase “interdependency of nations.”

The UN has a plethora of schemes to advance the goal of world government. The most important of these is Agenda 21 Sustainable Development. This is the global to local movement designed under the cover of green to transform our systems of government and economics. Every county in America has adopted its Sustainable plan moving us all closer to the one world order where your unalienable rights are no longer politically recognized.

While there is little the citizen can do to halt the UN’s control of uranium, the typical American can do much toward exposing the local application of the UN’s march under the local Agenda 21 protocol. In particular, Americans need to understand city alliances with the International Council of Local Environmental Initiatives (ICLEI). ICLEI is an NGO, accredited by the United Nations for the purpose of implementing Agenda 21 at the local level. Such contracts have been entered into by over 600 American cities. This is treasonous.

In short, the Sustainable objective is the abolition of private property, education for global citizenship, and the use of technology to control  human action. As ordinary people become aware of Agenda 21 hope rises that the Republic can be reestablished and that then the US can sever its ties with the United Nations and end the globalists’ one world ambition.

Be the first to comment on "United Nations Nuclear Bank"