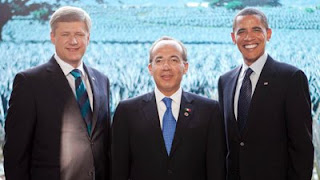 Out of the ashes of the defunct Security and Prosperity Partnership (SPP), the U.S. has pursued simultaneous bilateral agendas with both Canada and Mexico, in an effort to further deepen North American economic and security integration. While the NAFTA framework remains intact, a recent announcement by Canada and the U.S. to work towards a trade and security perimeter agreement without Mexico, has some questioning the future of the whole trilateral process.

Canadian Minister of Foreign Affairs Lawrence Cannon recently addressed the Council on Foreign Relations where he emphasized Canada-U.S. bilateral achievements and called for greater integration between the two countries. In his speech, Minister Cannon praised the February 4, Beyond the Border declaration issued by President Obama and Prime Minister Harper as, “a bold new step, intended to bring our economic competitiveness and our security perimeter to a higher level of joint commitment.” In regards to shared engagement in the hemisphere, he added, “Our Americas strategy is focused on promoting prosperity, democracy and security.” Cannon acknowledged, “We are working with the U.S. to help Mexico strengthen its police forces and judicial institutions to combat transnational, organized crime.” He also added, “The problems on the U.S. southern border are real but fundamentally different from those on your northern border.” Some have blamed the failure of the SPP on the trilateral approach and believe that it also prevented more meaningful Canada-U.S. bilateralism in areas of security, trade and energy.

In a recent article, Duncan Wood gives some reasons for Mexico being left out of Canada-U.S. negotiations on a perimeter security arrangement. He points to its worsening security situation, differences in development from its NAFTA partners, immigration issues, along with Canada’s reluctance to address border issues in a trilateral manner. Duncan also questioned, “What, then, does the perimeter security deal mean for the future of North American relations? I would venture that it marks the official beginning of a two-speed reality in the NAFTA region, with Mexico very much moving on the slower track. Canada will benefit from its deal with the US through closer ties.” Canada does hope to further strengthen its strategic relationship with the U.S. and increase its influence in Washington. The Economist sums up the current state of North American integration, “The main obstacle to trilateral co-operation is that Canada and Mexico are much more interested in their relations with the United States than they are in each other.” In many ways the Canada-U.S. bilateral border security agenda is being replicated through U.S.-Mexico initiatives, but with some variations that reflect the dynamics of the southern border.

Increasingly, security issues are further shaping continental integration. The Merida Initiative has provided a platform to deepen U.S.-Mexico relations. This has enabled the U.S. to assume more control over Mexican security priorities and intelligence operations. A U.S. State Department fact sheet entitled United States-Mexico Security Partnership: Progress and Impact proclaimed how both, “governments have built on the foundations of the Merida Initiative to establish four strategic areas to guide our cooperation and institutionalize our partnership: disrupt organized criminal groups; strengthen institutions; create a 21st century border; and build strong and resilient communities.” A New Border Vision for the 21st century is, “based on the principles of joint border management, co-responsibility for cross-border crime, and shared commitment to the efficient flow of legal commerce and travel.” A U.S.-Mexico declaration issued in May of last year, highlights key goals in strengthening border security. It also established the Twenty-First Century Border Bilateral Executive Steering Committee (ESC) in order to coordinate the implementation of joint initiatives.

In December of last year, the ESC tabled a Bilateral Action Plan. It included initiatives in areas of bi-national infrastructure coordination, risk management, pre-clearance, pre-screening and pre-inspection, along with greater law enforcement cooperation. The ESC also announced other cross-border and pilot projects. They agreed to expand trusted traveler and shipper programs in order to facilitate the flow of people and goods between the two countries. Some of these objectives are similar to those found in the recent Canada-U.S. declaration which lays out a framework to begin negotiations on a new trade and security agreement. It appears as if the newly created Beyond the Border Working Group will function much in the same capacity as the ESC and will also present a joint Plan of Action in the coming months.

Mexican President Felipe Calderon is scheduled to meet with U.S. President Barrack Obama in Washington on March 3. It is being described as a working visit where the leaders will, “discuss key issues in relations between the two countries and regional and international issues of common interest.” Calderon will also meet with Republican Congressman and Speaker of the House of Representatives, John Boehner. Over the last several months, there has been numerous high-level discussions regarding North American issues. This includes a meeting in late January between Secretary of State Hillary Clinton and Mexico’s Foreign Secretary Patricia Espinosa. In a joint press conference, Clinton declared, “we are following through on the declaration by both of our presidents on 21st century border management. We’re exploring ways to inspect and clear legitimate goods away from border stations. We are trying to do more on our side of the border to prevent money laundering and illegal arms coming into Mexico.” Clinton’s visit to Guanajuato was used as an opportunity to reinforce the close relations between the two countries and to identify common goals, as well as strategies to ensure greater security cooperation.

The growing violence and insecurity in Mexico, along with other challenges, have altered the trilateral agenda. As a result, the focus has further shifted to a dual-bilateral approach in managing continental border and economic concerns. This is not to say that trilateralism has been abandoned. Under the right circumstances, these parallel bilateral initiatives could converge into one to create a fully integrated North American security perimeter that includes not only Canada and the U.S., but Mexico as well.

Dana Gabriel is an activist and independent researcher. He writes about trade, globalization, sovereignty, security, as well as other issues. Contact: beyourownleader@hotmail.com Visit his blog at beyourownleader.blogspot.com