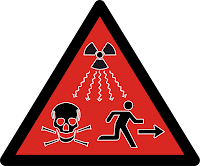 An official United Nations forecast of the possible movement of the radioactive plume coming from crippled Japanese nuclear reactors shows it churning across the Pacific, and touching the Aleutian Islands on Thursday before hitting Southern California late Friday.

The Feds have deployed radiation detectors to the west coast to monitor the situation. A link to the radioactive nuclear fallout map is below.

From The NY TIMES:

Scientists Project Path of Radiation Plume
A United Nations forecast of the possible movement of the radioactive plume coming from crippled Japanese reactors shows it churning across the Pacific, and touching the Aleutian Islands on Thursday before hitting Southern California late Friday.

Health and nuclear experts emphasize that radiation in the plume will be diluted as it travels and, at worst, would have extremely minor health consequences in the United States, even if hints of it are ultimately detectable. In a similar way, radiation from the Chernobyl disaster in 1986 spread around the globe and reached the West Coast of the United States in ten days, its levels measurable but minuscule.

The projection, by the Comprehensive Test Ban Treaty Organization, an arm of the United Nations in Vienna, gives no information about actual radiation levels but only shows how a radioactive plume would probably move and disperse.

The forecast, calculated Tuesday, is based on patterns of Pacific winds at that time and the predicted path is likely to change as weather patterns shift.
Read Entire Article

US Deploys Radiation Monitors to the West Coast

In apparently related news the feds are deploying radiation detectors to the west coast to monitor radiation levels from the fallout.

The U.S. Environmental Protection Agency already monitors radiation throughout the area as part of its RadNet system, which measures levels in air, drinking water, milk and rain.

The additional monitors are being deployed in response to the ongoing nuclear crisis in Japan, where emergency workers are attempting to cool overheated reactors damaged by last week’s magnitude-9.0 earthquake and tsunami.

Officials with the U.S. Nuclear Regulatory Commission said they do not expect harmful radiation levels to reach the U.S. from Japan.

“The agency decided out of an abundance of caution to send these deployable monitors in order to get some monitors on the ground closer to Japan,” said Jonathan Edwards, director of EPA’s radiation protection division.
Read Entire Article

Be the first to comment on "Official UN Forecast: ‘Diluted’ Radioactive Fallout Heading To US West Coast"