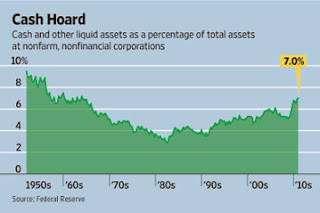 U.S. companies’ cash hoard keeps getting bigger, a trend both good and troubling.

After hitting new highs in five of the last six quarters, nonfinancial corporations’ cash and other liquid assets reached $1.9 trillion at the end of 2010, according to the Federal Reserve. That’s 7% of all their assets, the highest level since 1963.

On the bright side, the cash pile reflects the resilience of America’s companies and capital markets. Thanks in part to improved resource-management systems, executives have been able to act with lightning speed, slashing costs during the recession and hiring only as much as they need during the recovery — tactics that have generated record profits, if not jobs. Dynamic bond markets have allowed big companies to raise vast amounts of money even as banks have pulled back on lending. That has helped the U.S. avoid the kind of bankruptcy epidemic many had expected.

Be the first to comment on "Number of the Week: Companies’ Cash Hoard Grows"