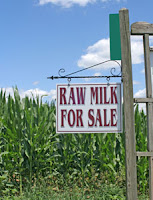 The town of Sedgwick, Maine, currently leads the pack as far as food sovereignty is concerned. Local residents recently voted unanimously at a town hall meeting to pass an ordinance that reinforces its citizens’ God-given rights to “produce, process, sell, purchase, and consume local foods of their choosing,” which includes even state- and federally-restricted foods like raw milk.

The declaration is one of the first of its kind to be passed in the US, and it is definitely not the last. Several other Maine towns — including Penobscott, Brooksville, and Blue Hill — all have similar ordinances up for vote in the coming weeks.

“Tears of joy welled in my eyes as my town voted to adopt this ordinance,” said Mia Strong, a Sedgwick resident who frequents local farms. “I am so proud of my community. They made a stand for local food and our fundamental rights as citizens to choose that food.”

In addition to simply declaring food sovereignty, the ordinance also declares it a crime for state and federal authorities to violate ordinance provisions in any way. The law specifically states that “[i]t shall be unlawful for any law or regulation adopted by the state or federal government to interfere with the rights recognized by this Ordinance.” This includes, of course, any attempt to enforce the unconstitutional provisions of the S 510 the HR 2751 food tyranny bills that were recently passed (http://www.naturalnews.com/030789_Food_Safety_small_farmers.html).

And what about potential conflicts that may arise between farmer and patron? The two will agree to enter into private agreements with one another, apart from government interference, and settle any disputes that arise personally and civilly. It is the way things used to be done before Americans sacrificed their freedoms to the US Food and Drug Administration (FDA) and other federal agencies that now tell the public what they can and cannot eat.

In December, the state of Vermont drafted its own food sovereignty bill (http://www.naturalnews.com/030827_food_sovereignty_Vermont.html), and several others are considering similar bills as well.

To learn more about how to promote food sovereignty in your town, city, county, or state, visit the Tenth Amendment Center at: http://www.naturalnews.com/030827_food_sovereignty_Vermont.html

Sources for this story include:
http://www.thecompletepatient.com/journal/2011/3/7/heres-a-way-to-eliminate-the-regulators-and-lawyers-and-buil.html