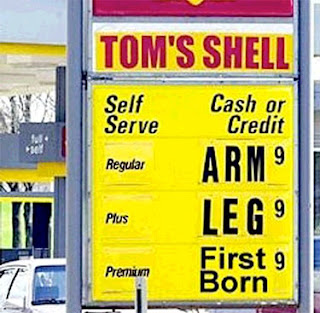 Oil industry experts warn that the price for a gallon of gas will reach $5 before summer. They blame the unfolding conflict in Libya and across the oil-producing Middle East for exploding prices.

Oil prices do not follow the classic laws of capitalist supply and demand. Despite the fact the Energy Department reported a 2 million-barrel rise in crude oil supplies for the week that ended March 18, according to a survey by Platts, the energy information arm of McGraw-Hill Cos, the price of gas continues to rise. The increase represented 970,000 barrels.

Supply and demand is an irrelevant theory under globalist mercantilism.

“Supply and demand mean nothing to the oil industry. Basic economics teaches that if supply goes down, prices will go up. If demand goes down, prices go down. The inverse of each is also true, unless you are in the oil industry,” writes The Mercury in an op-ed. “Previous excuses for price increases of gasoline have been damage to refineries by Hurricane Katrina, a pipeline leak in Alaska, the increased cost of refining for the summer time driving season, the war in Iraq, and most anything that can be associated with gasoline.”

Confronted with an overall supply increase, the industry expects gasoline supplies to decline by 2 million barrels, distillate stocks to shrink by 1.5 million barrels and refinery utilization to increase by 0.3 percentage point to 83.7 percent according to Bloomberg.

Nielsen Wire reports that a 50-cent increase in gas prices would cost the typical U.S. household about $52.50 per month, and if prices were to rise two dollars, that would mean $210 a month, or more than $2,500 a year.

In December, former oil industry chaplain Lindsey Williams said the price of oil would skyrocket to between $150 and $200 a barrel this year. Williams became a friend and trusted confidant of oil industry executives while he served as chaplain for them and their construction crews building the Alaska pipeline during the 1970s.

Williams believes the global elite plan to kill the dollar and bring the once great United States to its knees and reduce it to third world status.