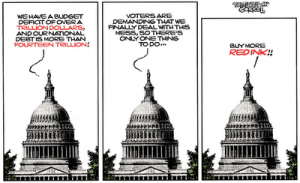 So, it looks like America will still be on the hook both militarily and financially.  This appears to be a political move to give the appearance of less U.S. involvement in the Libyan war.  Nothing could be further from the truth because, the fact is, without the U.S. and its military might, the entire operation would fall apart.  It has been reported that some UK Ministers say this intervention in Libya could last “30 years.”  Yes, you read that right—30 years!  The Daily Mail reported this week, “Asked for an estimate, British Armed Forces Minister Nick Harvey said: ‘How long is a piece of string? We don’t know how long this is going to go on.  ‘We don’t know if this is going to result in a stalemate. We don’t know if his capabilities are going to be degraded quickly. Ask me again in a week.” (Click here for the complete Daily Mail story.)

Be the first to comment on "Could America be Pushed over the Economic Edge?"