Many of us believe the Internet to be open and free for us to explore all known information.  Indeed, it is true that we currently can surf to any active website with our browser, and we can start a website or blog on any topic we wish to discuss.  And it is quite a profound concept that everyone with a smart phone literally has all of the world’s knowledge in the palm of their hand.

Ben Franklin knew well the importance of free access to information when he founded the first public library in America to share knowledge with those without the means to their own books.  Today, he surely would consider the Internet’s unprecedented access to information, and ability to communicate it instantly, as the ultimate level playing field of economic mobility and freedom.

However, this access is now under threat of authoritarian control.  First, it is important to note that the gears of the Internet have always been controlled by central authorities, as Douglas Rushkoff recently wrote, “From its Domain Name Servers to its IP addresses, the Internet depends on highly centralized mechanisms to send our packets from one place to another.”

Therefore, the idea that our movements on the Web are even remotely private or untraceable is false.  The central “authorities” who control the gears of the machine know exactly where you have been, while Google and the CIA have even developed ways of knowing where you’re going next as well.  It’s very creepy to know that our every move is being tracked, traced, and databased, but it has been happening from day one on the Internet, and will likely continue to happen despite the violation of basic rights to our privacy.

Because Internet privacy has never been possible in the current web infrastructure, any proposed “privacy law” would just seem to pay lip service to the idea if it doesn’t address decentralizing the control grid.  As Rushkoff pointed out, “I’m not trying to be a downer here, or knock the possibilities for networking. I just want to smash the fiction that the Internet is some sort of uncontrollable, decentralized free-for-all, so that we can get on with the business of creating something else that is.”

The focus here will be on the multitude of threats to our free access to the current Internet.  As Ben Franklin understood, information should be free and open to all, not just the select few.  Although the books in Franklin’s first library were indeed copyrighted material, they were freely shared.  We should think of the Internet as a gigantic open-source public library.  A place where information such as news, books, movies, and music should be free to view while we’re visiting the library.

Unfortunately, those who have control over the grid and influence over policymakers do not view the Internet in the same light.  It appears that they view it as an economic and propaganda playground — the last one that they don’t fully control.  Well, given the blight of proposed Internet control laws and web censorship tactics, it seems there is a calculated effort to control the free flow of information.

Below are 6 threats to our free and open access to the World Wide Web:

Legislation: The Protecting Cybersecurity as a National Asset Act, aka the “Internet Kill Switch” bill, has recently been reintroduced with a new Orwellian name, the Cybersecurity and Internet Freedom Act. This bill would give government the unchecked power to restrict access to the Internet if they declare a “national cyberemergency.”  CNET recently reported:

But the revised wording (PDF) continues to alarm civil liberties groups and other critics of the bill, who say the language would allow the government to shut down portions of the Internet or restrict access to certain Web sites or types of content. Even former Egyptian President Hosni Mubarak didn’t actually “shut down” the Internet: at least at first, a trickle of connections continued.

The second piece of legislation that’s being reintroduced this year is the Combating Online Infringement and Counterfeits Act (COICA).  This bill, clearly written by the mega-media entertainment cartel, would empower the U.S. Department of Justice to shut down, or block access to, websites found to be illegally sharing copyrighted material.  It gives the government the authority to force Internet Service Providers to block access to websites from certain IP addresses, much like how the U.S. recently blocked the Al Jazeera feed during the Egyptian protests.  COICA has also been referred to as the “Blacklist” bill because it allows the government to blacklist or seize any domain name suspected of infringement — even if located outside the United States. Clearly, DHS has displayed its technical ability to censor the Internet by removing these websites. And although the domain seizures were technically accompanied by a court order, it seems that the DHS has partnered with large media outlets and sports entertainment to protect their profits. Finally, these court orders are a guilty-until-proven-innocent ruling which can irrevocably damage small businesses and the livelihoods of many people whose path to justice remains unclear. 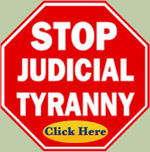 Civil Lawsuits: Again who needs laws when you can be frivolously sued in civil court over copyright issues and bullied into settling the claim. Copyright infringement trolls like Righthaven are suing blogs and sites, and despite the only court ruling to date being a dismissal of charges due to Fair Use rights, they are still forcing many settlements.  In fact, even Internet giant Drudge Report was forced to settle a civil suit involving a copyrighted image and link.
According to Steve Green, who’s been diligently covering these lawsuits for the Las Vegas Sun, claims they are a new type of legal enterprise:

Attorneys say the Righthaven lawsuits are unprecedented in recent memory because, in the past, newspapers dealt with online copyright infringement by simply asking infringing websites to remove the infringing material and to replace it with a link to the source newspaper. Most Righthaven defendants say they were sued without warning.

Not surprisingly, most of the cases are settled out of court.  However, this tactic is a very effective intimidation tool against small websites who seek to share information.  In some cases the costs and aggravation of combating the lawsuit can force the closure of these website defendants.

Net Neutrality: It would seem that net neutrality should fall under the legislative category. However, it is actually considered more of a “market based” regulation than actual law, yet the taxpayer still funds its enforcement through the FCC.  Before identifying the reasoning behind and specific aspects of net neutrality rules, it’s worth noting that Internet futurist, Douglas Roshkoff, views the details as irrelevant because:

The moment the ‘net neutrality’ debate began was the moment the net neutrality debate was lost. For once the fate of a network — its fairness, its rule set, its capacity for social or economic reformation — is in the hands of policymakers and the corporations funding them — that network loses its power to effect change. (source)

The concept behind net neutrality is just what it says; to keep Internet access neutral for all users. But again, it is a very Orwellian term where true supporters of a free an open Internet can be tricked into supporting so-called neutrality rules.  Blogger Timothy Karr wrote, “The rule is so riddled with loopholes that it’s become clear that this FCC chairman crafted it with the sole purpose of winning the endorsement of AT&T and cable lobbyists, and not defending the interests of the tens of millions of Internet users.”

What they are, in fact, are rules to allow service providers to charge tiered price levels depending on the amount of broadband used by individual web-surfers or websites.  In other words, certain access will be discriminated against through reduced access speeds or additional fees.  Besides limiting size of the surfer’s information wave, this tiered approach to the Internet will likely make it very difficult for smaller websites to compete with the big boys who can afford to pay ISPs for unadulterated access.

Technical Censorship:  Google, Facebook, Youtube, Twitter and Wikipedia have become the most powerful information sharing tools the world has ever known. Combined, these five websites could literally rewrite history or shape the entire flow of current information if they chose to do so. Indeed, each of these virtual libraries has been repeatedly accused of censorship in many various forms; from blatant removal of content to manipulating the searchable strength of disapproved content.

Google, who seems so powerful that they may actually run the world, recently revealed that they are tweaking their search algorithm to weaken the search engine ranking of information aggregating websites referred to as “content farms.”  It seems that Google seeks to reduce websites with little original content to the level of spammer status in their search results. What’s more, Google can wield the power of their Google Page Ranking for individual sites.  Their constantly changing algorithm may actually penalize websites for search engine optimization, as with the recent case of JC Penney losing business due to Google penalizing them for SEO.

Taxes:  If Congress or local governments elect to tax websites, the level playing field on the Internet is finished.  In May 2010, the Federal Trade Commission proposed the “Drudge Tax” which would seek to tax news aggregators as if they are brick and mortar media companies. The FTC report also suggested that news aggregators be forced to pay copyright fees to link to mainstream news sources.  And in perfect wealth distribution fashion the report also discusses the “possibility of offering tax exemptions to news organizations, establishing an AmeriCorps for reporters and creating a national fund for local news organizations.”

More recently, some states have proposed taxing online retailers such as Amazon, arguing that it’s not fair for local retailers who must pay taxes for selling the exact same items.  In the past, Amazon has terminated its contracts with third-party affiliates in states who have adopted online tax laws. California Congressman, Dan Lungren, introduced the resolution Supporting the Preservation of Internet Entrepreneurs and Small Businesses aimed at preventing states from imposing these new taxes on online retailers.

What’s more, some states and even municipalities are beginning to impose a blogger fee referred to as a “privilege license” as a sort of business license for blogs.  Philadelphia has forced bloggers to pay a $50/year, or $300 lifetime, fee for the privilege of expressing ideas online.

Conclusion
It seems clear that the powers-that-be are engaged in an all-out assault the free flow of information on the Internet.  Blogs and websites must be prepared to combat the coming onslaught of news laws, regulations, and fees.  For those who believe information should be free for all who pay for Internet access, we must fight to maintain this liberty.  Stay tuned to the new blog Sites & Blogs for breaking Internet news and legal commentary about online copyright and privacy rights.