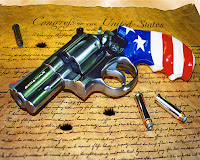 Just one week after a lunatic suffering from delusions and hallucinations killed six people and wounded eighteen in an assassination attempt on U.S. Representative Gabrielle Giffords, the crisis managers have turned up the heat.

One might be able to stand the political grandstanding made by politicians, pundits, and even the President himself, if the consequences weren’t so dire here in the real world. As is the case in every shooting, whether legitimate or manufactured by the government, gun-grabbers leap into action to use the tragedy as an example of why the American people should be disarmed. Gun owners and militias are demonized as well as those who espouse “conspiracy theories.”

Even those who support the Constitution and ending the private Federal Reserve are considered fringe fanatics in the eyes of the mainstream media.     In this regard, the latest incident is no different than any other.  As usual, mainstream media and their talking heads launched an attack against the usual suspects as mentioned above; specifically Alex Jones, David Icke, and Ron Paul. The initial attack upon the three dangerous individuals (one being a congressman, the other two being a radio talk show host and author, respectively, who have both repeatedly emphasized non-violence) was launched by Mark Potok of the Southern Poverty Law Center, a notorious race-baiting organization who has had many ties to intelligence agencies.  It should also be mentioned that Mr. Potok, who is obviously considered to be such an expert on these issues, could not even do the simple research needed to pronounce David Icke’s last name properly.

Within days of the attack, unconstitutional gun laws were being promised and prepared for introduction into Congress with support from the infamous Bradys.

Yet this reactionary assault on the Constitution did not end with the Federal government. State governments are planning their own brand of tyranny for their citizens. An example of this is a new law being proposed by the South Carolina state legislature which is, admittedly, a result of and response to the Giffords shooting in Tuscon.

The new law, which will be introduced by State Representative Chip Limehouse next week, will require South Carolina colleges and universities “to turn over records  on disruptive and threatening students who drop out” in order to “avoid tragedies like the recent shooting in Tucson, AZ.” How this law will actually help to prevent these types of tragedies is not explained. Perhaps because it won’t.

It is hard to say exactly how having the shooter’s information and university records on file would have prevented him from committing the crime. That is, unless everyone who had such a record was being monitored in some kind of massive Big Brother surveillance system in real time. While it might be true that this bill might help to build a case for prosecution after the fact, the idea that it would prevent such an attack is absolutely ludicrous.

This law is nothing more than an attempt to give government more open access to private information — plain and simple. It is a blatant violation of privacy and the Fourth Amendment to the Constitution. South Carolinians should be out in the streets protesting this bill, not entertaining it as a legitimate solution. In the face of tragedy and adversity, it is high time the American people react with faith and courage instead of fear and cowardice.

After the passage of the unconstitutional disgrace known as the Patriot Act several years ago, many libraries began to destroy the records of what their patrons read for the same reasons. This was a true act of patriotism and one should be replicated by our colleges and universities. Let’s see if they have the same courage.

Be the first to comment on "Reactionary Gun Laws Being Proposed in South Carolina After The Tucson, Arizona Shooting"