Editor’s Note: Welcome to the world of sanity Judge. Although this announcement appears fair with the exception of repeated claims of conspiracy theorizing, the links lead the reader to gross misinformation pieces. 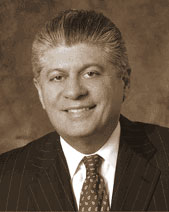 Fox Business host Andrew Napolitano revealed on Tuesday that he does not believe the government’s account of the 9/11 attacks. Napolitano, who hosts “Freedom Watch” on Fox Business and is frequently seen on Fox News, told radio host Alex Jones, who is a prominent 9/11 conspiracy theorist, that the attacks “couldn’t possibly have been done the way the government told us.”

The subject came about when Jones noted that Geraldo Rivera had recently raised questions about the collapse of World Trade Center 7 on Napolitano’s Fox Business Show. 9/11 conspiracy theorists have centered on that building’s collapse, contending that it was blown up by government forces. Jones asked Napolitano what his opinion about the issue was.

“It’s hard for me to believe that it came down by itself…I am gratified to see that people across the board are interested. I think twenty years from now, people will look at 9-11 the way we look at the assassination of JFK today. It couldn’t possibly have been done the way the government told us.”

Be the first to comment on "Andrew Napolitano, Fox Business Host, Reveals He Is A 9/11 Truther"