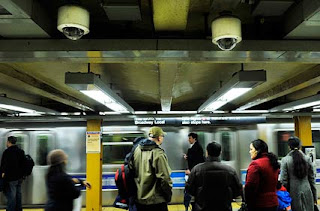 Surveillance video from subway stations are getting closer scrutiny recently, as transit police increase efforts to identify and arrest armed robbers and other criminals, a published report said today.

The NYPD asked transit police to pull footage from surveillance cameras some 2000 times last year — ten times more often than five years ago, the Daily News reports.
There are now 3100 cameras installed in city subway stations recording activities, officials said.
Millions of people ride the subway each day, and crime on trains and in stations is at a historically low level with an average of fewer than six felonies a day in the 468-station system, the News reported.
However, as the MTA faces a massive budget shortfall that has led to service cuts and the layoff of hundreds of station agents, some riders worry that crime could be on the rise in unattended stations.
Meantime, the MTA intends to install another 1000 cameras before the end of the year.