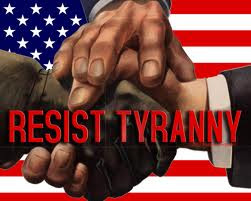 If you want to know what tyranny is like, look around.

The national government — specifically the executive branch — can do pretty much what it wants. It could bomb Iran tomorrow without a declaration of war from Congress. It can — and does — conduct secret wars and covert operations against countries that have done nothing to us. Of course, they are secret only to the ignorant taxpayers who must finance them and perhaps suffer when the provoked retaliation occurs. It can have men behind PlayStation consoles in Nevada fire Hellfire missiles from aerial drones on people in Pakistan, Yemen, and elsewhere.
This tyrannical government can send any foreigner picked up anywhere in the world to third countries known for torturing prisoners. It can hold people accused of nothing indefinitely in prisons in Cuba and Afghanistan and torture them into making false confessions. It can conduct a war crimes trial in a military kangaroo court for a man, Omar Khadr, held captive for eight years after he was picked up at the age of 15 during a U.S. assault on villagers near Kabul. His torture-induced “confessions” will be admissible. All this is in violation of commitments under the Optional Protocol on the Involvement of Children in Armed Conflict not to treat children in war as though they were adults.
It can assassinate even American citizens abroad without a scent of due process.
It is a government that can write its own warrants without judicial review — and call them national security letters — in order to conduct fishing expeditions in anyone’s electronic records. But that isn’t enough power for the present Progressive administration, which wants the freedom to examine our browser histories and email correspondents’ names. The Bill of Rights, like the Geneva Convention, has become “quaint” and obsolete.
Like any self-respecting tyranny, it tries to keep the truth from its subjects. Comforting words camouflage the 50,000 armed and combat-ready troops that will remain in Iraq after “withdrawal.” Their “primary” mission is to train an army whose own general says won’t be ready for years. This gross deception follows on the heralded “surge,” which supposedly turned things around in Iraq. What “worked,” however, was not U.S. military prowess or Gen. David Petraeus’s brilliance, but the spreading of American taxpayers’ cash to buy off Sunni insurgents and the denouement of ethnic cleansing in Baghdad.
And, again, like any self-respecting tyranny, it bridles at leaks of classified documents that tell the people the truth. Solemn administration officials condemn Wikileaks and its sources for supposedly jeopardizing U.S. troops and Afghan collaborators, while adding that nothing new had been revealed. With no sense of irony, the same officials find blood on the hands of Wikileaks’ Julian Assange, ignoring the rivers of blood their policies and weapons have produced in the Middle East and South Central Asia. Without those policies, there would be nothing to leak. Some call for the assassination of Assange, and for all we know he is on President Obama’s kill list. Meanwhile a courageous young soldier, Bradley Manning, who apparently leaked video of American troops committing cold-blooded murder in Baghdad, faces 52 years in prison.
Now we are being softened up for the next war, against Iran. As in 2002 with Iraq’s phantom WMDs, the empire advance men tell us Iran is building nuclear weapons, and Obama and Secretary of State Clinton say “all options are on the table,” which phrase includes hydrogen bombs. Once again a Big Lie is repeated without proof. The reason is simple: all evidence runs the other way. The government’s own intelligence agencies say Iran has no nuclear-weapons program, and the International Atomic Energy Agency is on the scene. But no matter. If it suits the tyrannical administration or its partner in empire, Israel, bombs of some kind will fall. The consequences all around will be horrible.
Can it really be tyranny if we get to vote? Yes. Thomas Jefferson warned of “elective despotism.” How valuable is your one vote when the government manipulates and distorts the flow of information, when Congress capitulates, and when the “adversarial” mainstream media act like government press agents, if not adoring lapdogs. The ugly truth is out there, but you have to want to know it.
Sheldon Richman is senior fellow at The Future of Freedom Foundation, author of Tethered Citizens: Time to Repeal the Welfare State, and editor ofThe Freeman magazine. Visit his blog “Free Association” at www.sheldonrichman.com. Send him email.
RELATED ARTICLES:
Activism in the Age of Tyranny and Terror
The Ultimate Betrayal:  Police and Military Working Together to Oppress Americans
Another Nuremberg in the Making: Intelligence Agencies Employ Physicians to Torture Detainees

Be the first to comment on "None Dare Call It Tyranny"