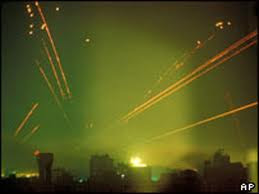 “[General McChrystal says that] for every innocent person you kill, you create 10 new enemies.” — “The Runaway General,” Rolling Stone, 6/22/10

The truth that many Americans find hard to take is that that mass U.S. assassination on a scale unequaled in world history lies at the heart of America’s military strategy in the Muslim world, a policy both illegal and never seriously debated by Congress or the American people. Conducting assassination operations throughout the 1.3 billon-strong Muslim world will inevitably increase the murder of civilians and thus create exponentially more “enemies,” as Gen. McChrystal suggests — posing a major long-term threat to U.S. national security. This mass assassination program, sold as defending Americans, is actually endangering us all. Those responsible for it, primarily General Petraeus, are recklessly seeking short-term tactical advantage while making an enormous long-term strategic error that could lead to countless American deaths in the years and decades to come. General Petraeus must be replaced, and the U.S. military’s policy of direct and mass assassination of Muslims ended.