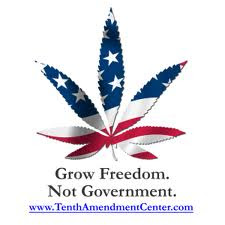 This February, around 300 conservative activists and candidates gathered at the Atlanta airport Hilton to celebrate the Tenth Amendment, the oft-overlooked constitutional provision that’s become the philosophical underpinning of opposition to everything—from bank bailouts to federal gun laws to the new health care bill. Among the speakers were the author of The South Was Right; a man who’d done time for evading taxes while running a gold and silver “bank”; and Roy Moore, the former Alabama Supreme Court justice who lost his robes after refusing to remove a giant Ten Commandments from his courthouse.

The odd man out was Michael Boldin, the founder of the Tenth Amendment Center, a tiny California think tank that cosponsored the event. Unshaven and dressed in jeans, an untucked button-down shirt, and hipster glasses, Boldin stood out from the crowd, which included the obligatory Tea Partier in a tricornered hat. The 37-year-old Wisconsin native told me that the Moore who’d inspired his activism was Michael, not Roy. Boldin describes himself as a “recovering Catholic” and reads Mother Jones. He got into politics because of the invasion of Iraq and has come to believe “that most of what the federal government does, from foreign to domestic policy, is a constitutional violation.”