BP and the government say the spill is fast disappearing—but dramatic new science reveals that its worst effects may be yet to come. 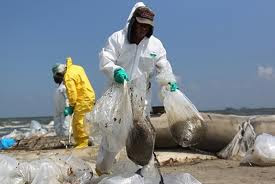 WE’RE SWINGING ON ANCHOR this afternoon as powerful bursts of wind blow down through the Makua Valley and out to sea. The gales stop and start every 15 minutes, as abruptly as if a giant on the far side of the Hawaiian island of Oahu were switching a fan on and off. We sail at the gusts’ mercy, listing hard to starboard, then snapping hard against the anchor chain before recoiling to port. The intermittent tempests make our work harder and colder. We shiver during the microbursts, sweat during the interludes, then shiver again from our own sweat.

I’m accompanying marine ecologist Kelly Benoit-Bird of Oregon State University, physical oceanographer Margaret McManus of the University of Hawaii-Manoa, and two research assistants aboard a 32-foot former sportfishing boat named Alyce C. On the tiny aft deck, where a marlin fisher might ordinarily strap into a fighting chair, Benoit-Bird and McManus are launching packages of instruments: echo sounders tuned to five frequencies; cameras; and a host of tools designed to measure temperature, salinity, current velocity, chlorophyll fluorescence, and zooplankton abundance, all feeding into computers lashed into the tiny forward cabin . . .
JUST ABOUT THE TIME WE drop anchor off Oahu, and unbeknownst to us, a catastrophe is being unleashed 4,400 miles and five time zones away, in the Gulf of Mexico. A mile below sea level, methane is shooting up the experimental well drilled by the Deepwater Horizon rig, exploding at the well’s head, killing 11 workers, and igniting a firestorm. After 36 hours of a raging inferno—and still unknown to any of us—the rig will sink and open a valve to the gargantuan reservoir of the Macondo oil field, estimated to contain perhaps as much as 1 billion barrels, or 42 billion gallons, of crude.
Though it won’t be understood for weeks, the Deepwater Horizon is different from any other spill in human history. The extreme technology used to drill at unprecedented depths lacks the extreme safety equipment and protocols needed to stave off disaster. BP, gambling at the border of controllable engineering, has lost spectacularly in its bid to be the deepest and cheapest driller of them all.
Read Entire Article

Be the first to comment on "The BP Cover-Up"