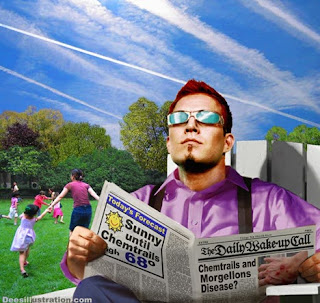 At an international symposium held in Ghent, Belgium May 28-30, 2010, scientists asserted that “manipulation of climate through modification of Cirrus clouds is neither a hoax nor a conspiracy theory.” It is “fully operational” with a solid sixty-year history. Though “hostile” environmental modification was banned by UN Convention in 1978, its “friendly” use today is being hailed as the new savior to climate change and to water and food shortages. The military-industrial complex stands poised to capitalize on controlling the world’s weather.  “In recent years there has been a decline in the support for weather modification research, and a tendency to move directly into operational projects.”  — World Meteorological Organization, 2007

The only conspiracy surrounding geoengineering is that most governments and industry refuse to publicly admit what anyone with eyes can see. Peer-reviewed research is available to anyone willing and able to maneuver the labyrinth of scientific journals. So, while there is some disclosure on the topic, full public explanation is lacking. A brief list of confirmed cloud seeding events is produced at bottom, starting in 1915.

Hosted by the Belfort Group, which has been working for the last seven years to raise public awareness of toxic aerial spraying, the Symposium included chemtrail awareness groups from Greece, Germany, Holland, France and the U.S.  Belfort published five videos covering only May 29,[1] when filmmaker Michael Murphy (Environmental Deception and What in the world are they spraying)[2] and aerospace engineer Dr. Coen Vermeeren [3] gave the most dramatic presentations.

Dr Vermeeren, of the Delft University of Technology, presented [4] a 300-page scientific report entitled, “CASE ORANGE: Contrail Science, Its Impact on Climate and Weather Manipulation Programs Conducted by the United States and Its Allies.” [5]

Case Orange notes it was prepared for the Belfort Group by a team of scientists but presented anonymously. It was sent to embassies, news organizations and interested groups around the world “to force public debate.”

The report spends some time on HAARP, the High Frequency Active Auroral Research Program, [6] which is a military endeavor focused on ionospheric, electromagnetic, and global electrostatic field manipulation, and on other exotic weapon systems that manipulate the environment. While related, they go beyond this discussion of chemtrails.

In the interest of brevity, the health and environmental implications of cloud seeding is not discussed in any depth herein. Case Orange does go into it, as did most of the speakers at the Belfort Symposium. Cursory research reveals a debate among researchers as to chemtrail toxicity, but whether that’s a 50-50 or 99-1 argument is unknown.

Contrails Are Chemtrails
Case Orange rejects use of the term ‘chemtrails’ because it is associated with amateur conspiracy theorists. The only credible document it could find that uses it is the Space Preservation Act of 2001 introduced by U.S. Representative Dennis Kucinich (D-OH). [7]  H.R. 2977 sought to ban the use of exotic weapon systems that would damage climate, weather, tectonic and biological systems. “Chemtrails” are specifically listed. Though later removed, no version of the bill ever became law.

Case Orange also rejects misanthropic intentions behind persistent contrails. It shows that geoengineering is fully operational, but rejects it is used to sicken people on the assumptions that 1) public health agencies have the public interest at heart; and 2) the economy is consumer driven. The authors indicate no awareness of numerous reports of collusion between the pharmaceutical industry and government health agencies. This year, a significant conflict-of-interest report appeared in the prestigious British Medical Journal, which further heightened suspicions that the H1N1 flu and its vaccines were a scam.[8]  Nor do the authors consider that sick people will spur economic growth in a capitalist (for profit) health system.

Be the first to comment on "Atmospheric Geoengineering: Weather Manipulation, Contrails and Chemtrails"