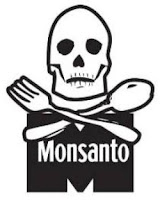 Jason Hancock – The Iowa Independent
The U.S. Supreme Court on Monday overturned a nationwide ban on the planting of genetically engineered alfalfa seeds, despite claims they might harm the environment.
In a 7-1 vote, the court reversed a federal appeals court ruling that prohibited Monsanto Co. from selling alfalfa seeds that are resistant to the popular weed killer Roundup. Justice Stephen Breyer recused himself due to the fact that his brother, Charles Breyer, was the judge who ruled in the originating decision. Justice John Paul Stevens was the lone dissenting vote.
The alfalfa seeds in question, like most of Monsanto’s products, are resistant to the active ingredient glyphosate used in the company’s trademark Roundup herbicide. Although the seeds were initially approved for use in 2005 by the U.S. Department of Agriculture, the approval was done after the department determined it did not need to conduct a formal environmental review. Environmental groups and a conventional seed company, Geertson Seed Farms, began their lawsuit in 2006 to force federal officials to fully explore the environmental impacts of the seed.
A federal judge agreed that a full review should have been completed by the USDA prior to approval of the seed, and the U.S. 9th Circuit Court of Appeals upheld the lower court ruling. Although farmers who had already planted the crop were allowed to continue, Monsanto was barred from further distribution of the product. In October 2009, Monsanto filed with the U.S. Supreme Court for a review of the case.
The court, in an opinion written by Justice Samuel Alito, said the trial judge abused his discretion by issuing the injunction.
The biggest impact of the court’s ruling could be felt in another Roundup Ready crop –  sugar beets. A federal judge ruled in September that the USDA didn’t conduct an appropriate environmental impact study on Roundup Ready sugar beets. A court hearing is scheduled for July, but Monday’s ruling may make it less likely that the judge will issue a broad injunction that bars the planting of the sugar beets while a full environmental study is conducted.

Be the first to comment on "BIG Surprise: US Supreme Court Sides with Monsanto"